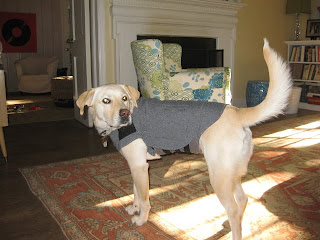 What are pressure wraps?

Many dogs suffer from behavioral issues and mental conditions that arise from fear and anxiety. The pressure wrap is an approach used to modify the behavior of dogs using a technique called “Controlled Pressure” to help calm the sensory receptors. When used properly it has been shown to end fear of loud noises, thunderstorm fear , dog aggression, shyness, nervousness, releasing stress & tension, end jumping, car sickness, unnecessary barking, , sensitivity to touch, sensitive to sound, aloofness, emotional upset, hyperactivity, grooming issues and other anxieties. It is a non-drug treatment for dog anxiety and just like slipping on a shirt. Dogs that display symptoms of anxiety can now be calmed by wearing these pressure wraps.

Why are dogs afraid of thunderstorms?

Fear of thunderstorms is common in dogs, and tends to get worse as they age. It is partly genetic. Too many dogs are left outdoors during storms, sometimes with no shelter at all. Anyone would be scared with good reason. Thunderstorms and the accompanying electrical energy disturbs dogs on a level most of us do not understand. The loud noise is scary to some dogs, and the dog can hear it at a much greater distance than humans can. The dog has early audio warning of an approaching storm, and most storm-phobic dogs eventually start reacting long before the sounds are loud. The smell of the air changes when a storm approaches, and of course the keen nose of a dog detects this early. The air pressure changes, too, and a dog’s ears are more sensitive to pressure changes than most people. In some cases, it might hurt. Phobias generally become worse, not better, with repeated exposures. Dogs with mild noise phobia may look anxious during thunderstorms, tremble, hide under the bed or in the bathtub, and be afraid to go out of doors for hours after the storm has passed.

The wrap applies slight pressure or maintained pressure across a wide area of the body, stimulating the body’s receptors to help in transmitting different sensations to different parts of the brain. When the animal receives this new information, it’s awareness & focus can change, resulting in the animal “letting go” of the old sensation and modifying its behavior.

The Body wrap does the following for most dogs suffering from noise anxiety:

Soon after putting on the wrap, your dog will likely settle down and relax. Many dogs will lie down and weather the storms with little to no further symptoms of noise anxiety.

From a more scientific perspective, according to neurobiologists, many types of traumas can cause nerve damage, leading to dogs having exaggerated responses to stimuli such as loud noises. Applying constantly maintained pressure with the body wrap provides an unchanging, quieting stimulus that allows the dog to relax.

Temple Grandin and Tellington Touch: Two resources have researched the issue on how pressure soothes.The first source is TTouch practitioners. TTouch was developed by Linda Tellington-Jones to help train horses and relax the horse’s mind and body. It was eventually adapted for other animals too. It uses a system of specific touches, and stretches to relax the animal, and increase body awareness. Getting in TTouch with Your Dog by Linda Tellington-Jones illustrates many techniques for wrapping an ace bandage around a dog to enhance “your dog’s sense of his own body and makes him more confident in his movements and behavior.” One of the tools used to continue TTouch benefits for a longer time is a body wrap.

The second resource is the famous autism researcher Temple Grandin who was herself an autistic child. Inspired by how cattle calmed down while being gently squeezed in a chute she developed a “hug machine”. As stated by Temple Grandin “after seeing cattle being put into a squeeze chute that held them still so they could get their shots. When I saw how calm the cattle got from the pressure on their bodies, I built my own squeeze machine, and it calmed my anxiety the same way.” The hug machine helped maintain constant pressure and proved to be effective in soothing the anxiety of autistic people. On the same lines a pressure wrap is a way to give the maintained pressure and contact that the dog craves for in times of anxiety.